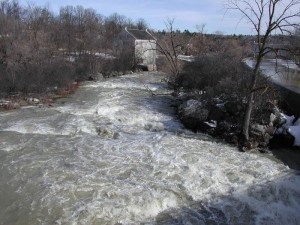 How does RPG generate power?

RPG uses dams and water from the Bonnechere River to propel its turbines to produce electricity. Energy is the product of two factors: the amount of flow and the height from which it falls. Water flows in through an opening called the water intake pipe. From the intake, the water flows under pressure through a pipe called a penstock into the generating station. Turbines are located at the end of the penstock. The turbines transform the energy from water into mechanical energy that makes the generator spin which in turn creates electricity. All of the water is returned back into the river through the tailrace.

RPG is a run-of-river system—relying on the natural flow of the Bonnechere River.

RPG’s three control dams, located on Golden Lake, Round Lake and Clear Lake, are used as reservoirs to moderate the flow of the river throughout the year. 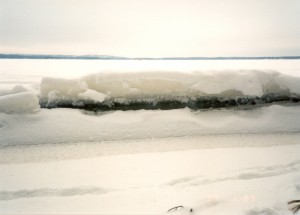 What is a spring freshet and how does it affect the cycle of generating power and managing water flows?

The cycle begins with the spring “freshet (snow melt and rains cause the water levels and flows in the Bonnechere River to increase rapidly) and allows for maximum power production. About 80% of power production occurs during the winter months up to the spring freshet.

In the past, water flows that exceeded RPG’s generator capacity was bypassed or ‘spilled’ back into the Bonnechere. Less water will be spilled because of the increased flow capacity into Thomas Low Generating Station–from 11 cubic metres per second to 20 metres per second creating greater production with less dam operations.

Once generation capacity is reached during the spring freshet, excess water is diverted using the two dams—at Renfrew.

Flow levels are managed returning water levels in Golden Lake, Round Lake, and Lake Clear—which act as reservoirs—to their summer levels by July, and generation is gradually reduced. Spillways are filled with logs to control the level of the water, until the lakes have reached a stable level. Over the summer, production is minimum because of lower flows. RPG does take advantage of rain events. It isn’t until mid-October that production increases with a controlled drawdown of water levels at Golden Lake and Lake Clear—when all logs are gradually removed from the dams. That provides the capacity for the spring freshet.

The controlled drawdown at Round Lake begins in December, reaching its lowest levels in March in time for the spring freshet.

Round Lake feeds into Golden Lake. During spring freshet or periods of heavy rainfall, Golden Lake generally reaches its upper operating limit before Round Lake does. Operationally, the logs are managed at both Round Lake and Golden Lake to increase the discharge from the upper Bonnechere. In “freshet” (high water) conditions, with all the logs removed from the Golden Lake Dam, the system is operating at full capacity. When Golden Lake is full and inflows exceed the maximum discharge capacity, high water conditions can occur.

Where are the dams and controls on the Bonnechere River system?

Who buys the hydro-electric power produced?

The power RPG generates is sold under contract to IESO (Independent Electricity System Operator). The IESO operates the electricity market in Ontario. It forecasts daily electrical needs and ensures that the demand is meet 24/7.

RPG operates on a 24/7 basis. RPG signed a 20-year contract in 2010 to supply power to IESO. The contracts for the Upper and Lower Plant have been rolled into one contract for TLGS—and will reflect a new higher guaranteed rate contract which is currently being confirmed. When TLGS requires maintenance or repairs and is off-line, power will be generated by the older plants and sold at market rates.

All of the power generated by RPG is distributed by Renfrew Hydro Inc. (RHI) into the provincial grid and fed directly to Renfrew customers. RHI is solely owned by the Corporation of the Town of Renfrew—the sole shareholder. Increases in rates must be approved by the Ontario Energy Board.