From Yesterday to Today 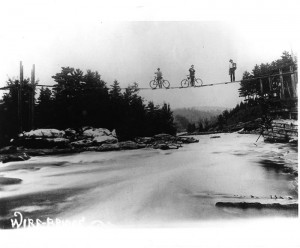 What were Renfrew’s earliest beginnings?

The 145-km Bonnechere River first attracted First Nations people who may have lived in the area as early as 5,000 years ago. Fur traders used the river to transport their goods in the 1820s and 1830s, as did lumbermen and settlers—the first permanent white settler, Joseph Brunette, arrived in 1823. By 1825, the current site of RPG was quickly identified as a prime source of waterpower.

The opening of a major colonization road: the Opeongo Line in 1854, drew more settlers and created better access to the giant stands of white pines in Algonquin Park. The name Opeongo comes from the Algonquin word opeauwingauk meaning “sandy narrows”. During the height of the flourishing lumber industry, at least 23 dams and timber slides were constructed to move water from streams to help drive logs down the river.

An industrial area began to grow up around the second chute on the Bonnechere River and included a beautiful stone mill built in 1855 by fur trader and Hudson Bay Company agent and store owner, John Lorn McDougall. Today, the mill is home to the McDougall Mill Museum. 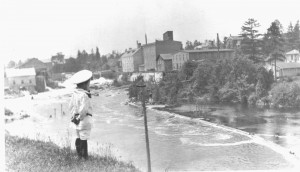 Incorporated as a village 1858, Renfrewville had a blacksmith shop, tannery, shoe-maker, brewery, a doctor’s office and an operating sawmill, along with other area shops and services.

Eventually, the industrial hub included among others: the grist mill, a saw mill, woolen factory, and axe factory—and the swinging bridge was built in 1895, linking the residential area with the hub and used by workers to get to and from work.

Renfrewville was incorporated as the Town of Renfrew in 1895 and dubbed by some as the “Creamery Town.”

In the 1880s, exciting developments were taking place in the field of electricity. Closer to home, in Renfrew, early recognition of the value of harnessing waterpower to create electricity would make Renfrew a centre for manufacturing. Thomas Low and his Renfrew Power Corporation played a major role in setting the stage for progress in Renfrew.

For further information about the history of Renfrew visit: Town of Renfrew and Heritage Renfrew. 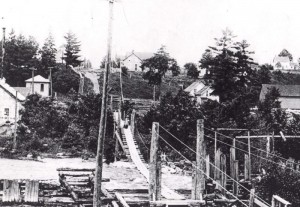 How did water-powered hydro-electric generation begin in Renfrew?

The Hon. Francis Hincks, later Sir Francis, an MP for Renfrew, and minister of Finance with Sir. John A. MacDonald, was one of the first to develop the power of the Bonnechere. In 1853, Hincks bought property on both sides of the river, hired a surveyor to lay out a town on the north side of the river, and created the Hincks section of Renfrew. Rows of streets and lots and industrial sites were created.

A dam and a long flume from the dam were constructed to service the industries, and a timber slide built. Large water wheels were used to create dependable water power.

Significant developments in the field of electricity were happening—and the first town in Canada to use electric street lights was Pembroke in 1884! 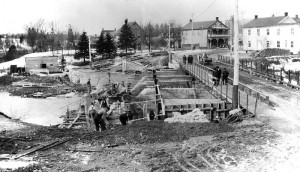 Here’s what happened in Renfrew:

1886
Barr and Wright set up a generator to supply power to five arc lights on major Renfrew streets.

1892
McKay and Guest set up a dynamo—an electrical gen erator driven by water power—to supply lighting in its new mill. They upgraded using a larger generator and connected it to an Edison system of incandescent lighting because of requests for lighting from people nearby.

1893
A.A. Wright buys an incandescent system for his plant.

1899
Thomas Low buys property downstream between Mutual Street and the river including the water rights as part of a plan to use waterpower to generate electricity for the Town.
Thomas Low teams up with W.A. McKay and others and forms Renfrew Power Company (RPC); sells his water rights and a portion of his land to RPC. 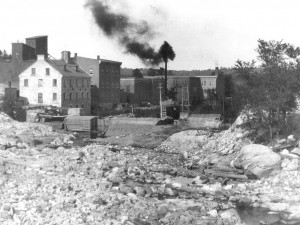 1902
RPC’s dam and generating station opens. Known today as the Lower Plant, it consisted of a stone and log crib dam (now under water below the Lower Dam) and two generation units (400KW and 600KW), fed by two wooden stave penstocks.

Why did the Town of Renfrew get into the water power generation business?

1908
This extremely dry year affected the water flows of the Bonnechere and the generation of electricity from water power. A steam-powered generator, left on standby, was used to maintain the waterworks and its ability to supply of water, but the growing operating expenses—resulting from the purchases of wood and coal–sharply increased even after RPC reduced its charges. RPC says it can’t promise similar generosity the next time.

1910
Town Council decides to purchase land and water rights and build the Upper Plant, dam and adjoining canal to create a reservoir to provide an uninterrupted supply of water regardless of environmental conditions.

1912
The Upper Plant opens with three turbine water wheels—two to drive the electrical generators and one to drive the waterworks. A steam-powered turbine was also installed to comply with the underwriters’ requirements.

1913
The Tramore Dam on Round Lake was installed in response to a demand for waterpower from industrial operations in the Town of Renfrew during the summer months.

1916
More power is needed to meet industrial needs during wartime. One of the generators at the Upper Plant owned by the Town is replaced with a larger unit and the steam engine is now used to drive a generator.

1916
The existing Golden Lake Dam was built with the original objective of increasing storage capacity so the system could generate more power.

1916
M.J. O’Brien offers to build plant at Calabogie. A power transmission line runs to Renfrew and a substation and dam was built on Smith’s Creek.

When did Renfrew Hydro-Electric Commission take over power production from the Town?

1938
The original Lower Dam was replaced with a concrete dam and the penstocks with three inch BC fir creosoted.

1944
Ontario Hydro tells the Town of Renfrew that it will not renew the Calabogie contract to supply power to Renfrew. Town Council signs a 40-year contract with Ontario Hydro.

1945
Renfrew Hydro-Electric Commission was created and took over electricity production from the Renfrew Power and Light Department of the Town of Renfrew.

1950
Power was changed from 2-phase to 3-phase bringing Renfrew in line with the rest of Ontario.

1981
A five-bay garage is built to store materials at the Upper Plant.

1983
A series of repairs are underway: repairs to foundation of the Lower Dam; raised the pressure cases and turbines, poured 10’ concrete walls inside tailrace walls down to bedrock under the building, set I beams and realigned turbines; removed two surge tanks and poured new concrete footings for surge tanks and 60” of 7 ft. steel flume.

1987
New steel 7’ flumes are installed at the Lower Plant.

1992
A new flume is installed at the Lower Plant.

Why did Ontario change the hydro-electric business and when was RPG formed?

1995
The MacDonald Committee recommends the elimination of Ontario Hydro’s monopoly on managing generation capacity, and opening electricity markets up to competition.

1997
The Ontario government released “Direction for Change: Charting a Course for Competitive Electricity and Jobs in Ontario” in 1997, detailing the government’s plans to open the market for electricity supply.

1999
A number of recommendations from the MacDonald Committee were incorporated into the Green Energy Act.  While the GEA confirmed that municipal governments owned the electricity utilities—such as the Renfrew Hydro-Electric Commission, it required that generation and distribution functions be split and delivered by two separate for-profit business corporations.

2000
Renfrew Power Corporation was formed as a for-profit generation company. The Corporation of the Town of Renfrew is the sole shareholder of RPG, owning 100% of the shares.

RPG’s value was split into: 50% debt and 50% equity. As the shareholder, The Town holds the debt in the form of a promissory note, and the equity shares.